Since artichokes are low in fat and high in fiber, minerals, and antioxidants, they are used in several kinds of recipes, especially those belonging to Italian cuisine. This is why health-conscious people are always looking for artichokes in the supermarket.

But you might not always have the luck of finding the artichokes, that too at a reasonable price range. In such situations, you can resort to its substitutes like Cardone, Asparagus, Brussels Sprouts, Chayote, etc.

If you want to know more, we have prepared a list of the best substitutes so that you can substitute them without worrying about any changes in texture. 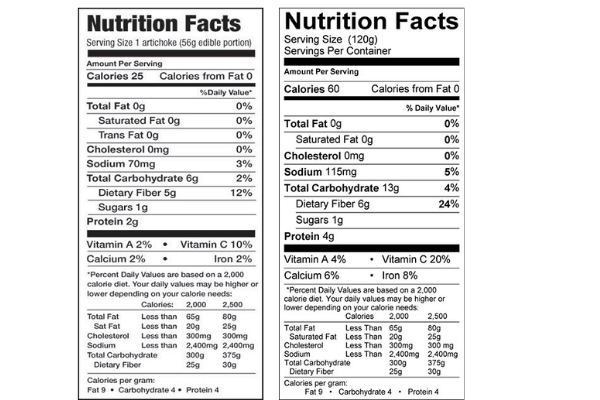 Before we get to the substitutes, it is best to understand the nutritional composition of the artichoke heart. You can compare this to that of the substitutes and select the healthiest option for yourself.

According to WebMD, a raw medium artichoke contains the following nutrients:

It should be noted that artichokes are gluten-free, making them suitable for patients with gluten-related diseases like celiac.

There is no one way to cook and consume artichoke hearts. You can either sautee, steam, grill, or braise it. If time is a factor, you can also scrap the “choke” part covering the vegetable and cut the heart into pieces. These pieces can be dipped into a sauce or butter for tasty and raw consumption.

To make it more convenient, we have added several artichoke substitutes. You can choose the one that suits your recipe and style of cooking. 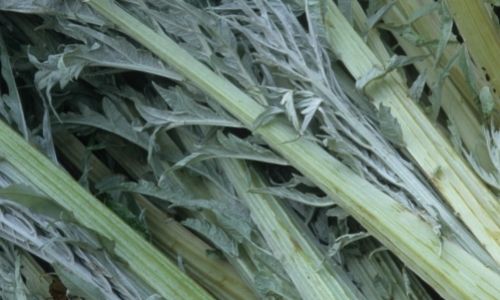 Cardone, which is also referred to as Cardoon, is a cousin of artichoke. While it may look like celery, its taste is extremely similar to that of an artichoke.

It is a traditional Mediterranean vegetable that has paved its way in Italian and French cuisine.

Just like artichoke, consuming raw Cardone might not be appreciated by your taste buds as it is on the bitter side.

Apart from that, you can fry them, add them to a stew, or make them into cheese. You can also use them as toppings in soups, salads, and even pizza.

You might want to keep them away from preparing sauces due to their inconsistent texture. 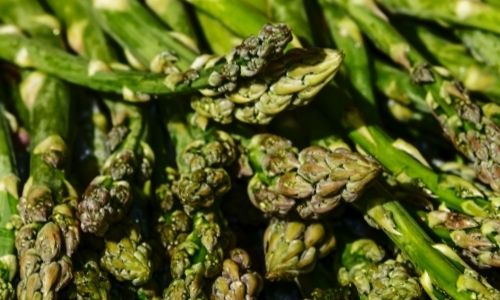 Just like artichoke, asparagus is a gluten-free vegetable. It is native to eastern Mediterranean lands and Asia Minor. Presently, it is grown in every part of the United States of America, Canada, and some parts of Mexico.

It is a thin and tall plant with leaves emerging from the stem and feathery foliage.

As far as the taste is concerned, asparagus has a mild earthy bitterness, faintly similar to broccoli or mushrooms. If you have older asparagus, it might have a sour taste as well.

You can add asparagus to a breakfast casserole or roast it with bacon. You can also add it to your favorite pasta by incorporating them into the pesto sauce.

Unlike artichokes, Jerusalem artichokes can be consumed raw by grating or slicing them. Pop them into a salad and enjoy the crunchiness.

Moreover, you can also boil or steam them till they turn soft. 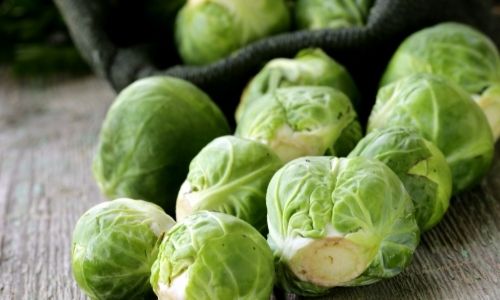 You might think that Brussels Sprouts were first found in Brussels, Belgium, if we go as per the name. However, this vegetable is native to the Mediterranean region. Later, it started being cultivated in  Brussels, Belgium, from which it got its name.

Similar to artichokes, Brussels sprouts have a nutty taste with a crunchier texture.

You can use this substitute by roasting them or cooking them over the stovetop. You can also deep-fry them with miso-sake sauce and crispy bacon. If you do not feel like cooking, you can also slow-cook brussels sprouts with herbs and spices to create a delicious side dish. 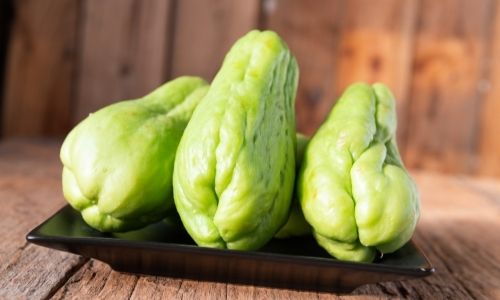 Chayote, also known as choko and mirliton, is native to Mesoamerica. Presently, it is found majorly in the United States of America, Mexico, Dominican Republic, Costa Rica, and Guatemala.

Generally, Chayotes are pear-shaped with dark and hairy skin. Its seed is surrounded by pale-green flesh.

However, the ones found in the United States have a smooth surface with apple-green-colored skin.

This substitute of artichoke can be consumed raw. You can either add raw Chayote to salsas and salads with lime juice. Or, you can lightly cook them to get a certain level of crispiness to your dish.

6. Heart Of The Palm

The Heart of the Palm is harvested from the growing bud and inner cold of palm trees like coconut, palmetto, açaí palm, and peach palm.

This vegetable has varying names as per the region. For example, it is known as palmetto or palm cabbage in Trinidad and Florida. The people of South and Central America prefer calling it palmito. The French like to call it coeur de palmier, and the Italian refer to it as cuore di Palma.

Heart of the Palm looks very similar to artichoke hearts. Moreover, they share the same texture as well.

Heart of the Palm has a slightly sweet and milder taste. But since they have the same consistency and texture as artichoke hearts, you can add them to sauces and gravies as a replacement for the latter.

Nutrients in Raw Heart of the Palm: 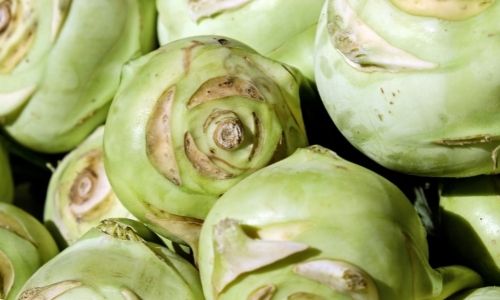 Kohlrabi is also known as a German turnip. However, despite its name, this vegetable has no relation to the turnip family.

The nomenclature never ceases to surprise, isn’t it?

In terms of taste, Kohlrabi is akin to a cabbage. It has a peppery-but-sweet flavor with a texture similar to broccoli stems. Good kohlrabi will be firm and never squishy.

If you are looking for the same flavor and texture as the artichoke, Kohlrabi is an extremely reliable substitute. You will get a refreshing flavor whether you consume it raw, roast it, or turn it into a sauce.

Bamboo shoots are almost a staple in Asian cuisine. This vegetable is used in the preparation of broths and soups.

They are in the shape of opaque cones with a crisp and tender texture. The outer layers of the bamboo shoots are supposed to be peeled before consumption. But you can also find canned bamboo shoots for more convenience.

Since raw bamboo shoots contain cyanogenic glycosides, which are natural toxins, you cannot consume them raw. They must be cooked thoroughly.

You can add them to ramen, curry, or consume them as a snack.

Rather than throwing out the broccoli stems, you can use them as a reliable substitute for artichoke. They have a beautiful texture that allows you to enhance your dishes in terms of flavor and aroma.

Broccoli stems have a mild vegetal sweetness. You might also get some hints of grassiness to the flavor.

Due to their texture, you can substitute artichoke with broccoli stems in appetizers and pasta. If not, you can cut them into thin slices and eat them raw with your favorite dip.

Napa cabbage marks its origin near Beijing, China. It has dominated East Asia cuisine and eventually Europe, Australia, and America.

This vegetable has light green leaves with a peppery flavor. Its succulent stems are tender and crispy.

Unlike other types of cabbages, this one is slightly sweeter and less pungent.

Suppose you want to replace artichokes in stir-frys and soups. You can also toss it into noodles to get a fine flavor and texture.

How to Store Artichoke?

You can avoid running out of artichoke at the last moment by buying in bulk and storing it properly. If that idea appeals to you, you can use the following tips to store artichoke:

Q. Is artichoke the same as palms?

While artichoke and palms have a similar appearance, the latter has a sweeter taste. But you can consider them substitutes since they provide similar texture.

Q. Why is it hard to find artichoke hearts in stores?

Artichoke hearts are available round the year, either fresh or canned. But it might be challenging to find fresh artichoke hearts in the second part of the year since they are only in season from February to June.

But you will easily find them canned or jarred any time during the year.

Even though artichoke hearts are delicious and nutritious, not all of us might have direct access to them at all times. But don’t worry; the aforementioned substitutes will work just fine for your recipes and dishes.

Our top favorites are Cardone, Asparagus, and Brussels Sprouts. Which ones will you be going for? Let us know in the comments below.