Butter is a creamy substance obtained from milk’s proteins and fats constituents and is a favorite culinary ingredient. Maybe you have been planning to use buttery products in your next meal?

If you try to add butter to plain room temperature water, you will see yellow blobs floating on top. This happens because butter is not dissolvable in water.

Through this article, you can try to understand why butter isn’t soluble in water. We explain the science behind solubility in simple terms. You will also learn the trick of forcing butter and water to mix.

What’s solubility, and is butter soluble in water? 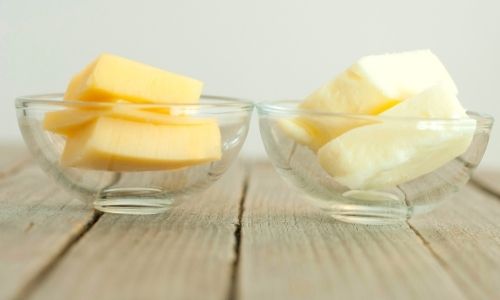 Solubility refers to a substance’s capacity to dissolve entirely in another substance, generally a fluid.

Once an element dissolves in the other, it will infuse with the other until the point where each molecule is integrated.

Whenever one substance can not be dissolved in the other, it will stay as dollops but will not combine uniformly. Butter isn’t an ingredient that is soluble in water.

The term “water-soluble” refers to the ability of the chemical compound to mix itself with water completely.

When maintained at ambient temperature, butter is semi-solid. It is made up of cow’s milk isolated from other dairy compounds.

Oils make up fats, and as you might expect, water and oil wouldn’t mix! As a result, the butter will not be soluble in water.

What’s The Science Behind Butter Not Dissolving In Water?

You might have noticed that butter can dissolve in heavy cream, so why not water? Let’s talk about oil since butter falls into this category. Here are some basic concepts to keep in mind:

Molecular bonds of the element hydrogen give the water its structure. There is less molecular bonding in liquid water than there is in ice.

Oils and fats are both non-polar. Fats need to disrupt a few of the molecular bonds of hydrogen to be able to disintegrate. Water does not let fat disorganize its hydrogen bonds, so breaking down isn’t possible.

Emulsification: The Only Way To Dissolve Butter In Water

Do you know how to make macaroni and cheese?

This recipe calls for butter to be added to the boiling hot water when you’re in the process of cooking. How many of you have observed what occurs once butter is added to hot water?

It begins to melt and sits on the surface of the liquid till emulsification occurs due to the warmth of the water. It retains the butter molecules in the fluid until it is thoroughly combined.

This is the process of emulsification. You won’t be capable of dissolving butter in water. You can, however, try to emulsify it.

A temporary sustainable mixing of immiscible liquids, as with fats and water, is created by splitting one component into minute droplets precisely.

Fats and water would not blend without the aid of an emulsifying agent, such as heating, detergent, or solvent.

Can You Safely Boil Butter? 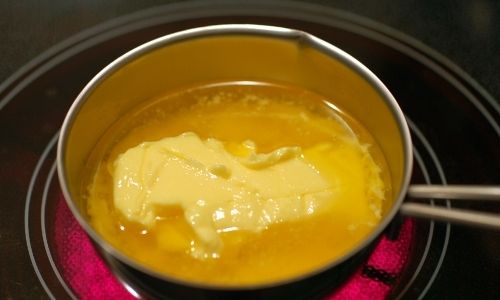 If you cook eggs, they will partly saute in the hot liquefied butter, converting your mix into delectable omelets. The same reason butter is so delicious is why it can never be suitable for cooking at high temperatures.

The rich, balanced flavor comes from the milk solids, which tend to burn faster, unlike oils such as sunflower oil, vegetable oil, or sesame seed oil.

Butter has a smoke point of 350°F/175°C which is why it begins to burn faster than ghee. As long as you stay within this temperature limit, it should be safe to boil butter.

What Happens When You Boil Butter In Water? 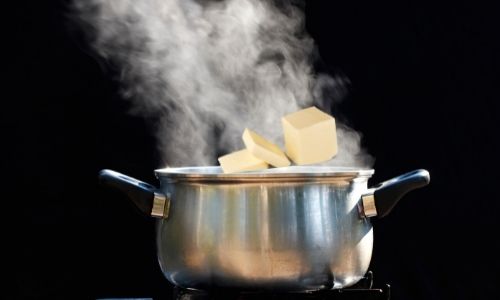 When all the heated butter comes to a boil, it will initially froth and splutter as the water vapor condenses. Cover and continue to melt the butter.

After a while, the butter will start the process of emulsification.

Butter isn’t something that can be dissolved in water. Solubility plays a considerable role in this. Butter separates when heated in water and after it emulsifies with water. If you were to do this at high temperatures, the butter could burn.

If you were planning to mix water and butter, you would need an emulsifying agent like heat.

Were you able to learn something new? Let us know in the comments.