If you are someone who doesn’t use soy sauce regularly or there is a time when it is used heavily, and then you probably forget about it, you may have this question in your mind, if it has spoiled?

There are more chances that you can still use it, but it depends on the time and how you store it. Normally, soy sauce comprises sodium that prevents the growth of microorganisms in salty conditions.

Further, you may sense that the quality of the taste has gone down. If you store it with all caution, then it may retain its flavor, smell, and freshness for a considerable amount of time.

Therefore, in the upcoming sections, you will learn about the shelf life, storage techniques, and indications of how to recognize if the soy sauce has gone bad or still there is a chance to revive it. Let’s explore.

The final verdict of the next discussion is that soy sauce or other soy sauce-based products are capable enough to last for quite a long time.

Both manufacturers and daily consumers suggested that if you have opened the Soy sauce bottle, you should consume it as swiftly as possible. Here, swiftly doesn’t mean in a week or so. It implies within a month or upto six months, depending on the brand and quality.

For your convenience, if you have kept an unopened soy sauce in the pantry, you can estimate that it is best by two years. While if you have stored it in a fridge immediately after opening it, you can still use it upto the completion of two years.

If you have an opened soy sauce in your pantry, then it will be best by six months. However, if you have stored it in the fridge, you can use it for one year.

How to Tell if Soy Sauce has Gone Bad? 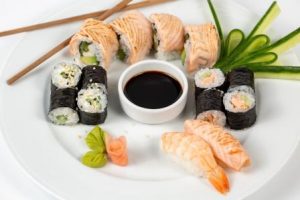 One more fact related to soy sauce is that it doesn’t go bad unless you add water or any other ingredient to it. For that, you can store it in quite an airtight container. However, it would be better if you could check the taste or smell periodically so that you can have enough time to alter it. Regardless, the following signs can help you pick out a good bottle of soy sauce from a bad one:

The taste of soy sauce is similar to beer or a fresh batch of baked bread. While it has a strong smell, it is manageable.

But if the soy sauce smells awkward, it’s time to bid adieu to it. There may be a probability that it is only the smell that has gone bad, not the taste. While there are chances that it may spoil your sushi.

Generally, soy sauce has a bitter taste, followed by saltiness and sweetness. But if you notice an overwhelming flavor of bitterness, your soy sauce has likely expired, and you must toss it out.

Incorrect storage techniques can cause your bottle of soy sauce to get contaminated with mold. Mostly, it could be due to external factors.

Additionally, if the bottle is not sealed well and you doubt that the contaminants have gone inside the bottle, again better if you discard it as soon as possible.

Consuming expired soy sauce has not been connected to getting sick directly. While it might affect the taste of the dish, it has not been directly linked to food poisoning.

This is why one can consume expired soy sauce.

However, the bottle of soy sauce laded with mold or any other contaminants must be discarded as such a product can potentially cause stomach infection, nausea, vomiting, etc.

Can you Freeze Soy Sauce?

The direct answer is a no. Mostly, you don’t need to freeze the soy sauce. Here is a quick heads up related to all the fermented foods such as miso, fish sauce, etc. This type of product can be left in the open at room temperature for some time without going bad.

The microorganisms breeding on such food items not only give a particular flavor but also help in preserving the fermented foods. Similarly, soy sauce is made from a fermented paste of roasted grains, brine or saltwater, soybeans, and mold.

Further, if you will not open a soy sauce bottle, it can sustain for even 2 to 3 years, or you can say forever as well. Also, if you have an opened bottle, keep it in your refrigerator, and you can use it for up to one year.

How to Store Soy Sauce? 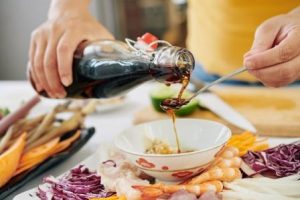 You may follow the same procedure as following to store coffee beans, olive oil, etc. the soy sauce should be kept safe from direct sunlight and heat. The ideal place for storing it can be a dark and cool cabinet where there is no heat and light. Remember, heat and light degrade the quality of such items much more swiftly.

Further, avoid storing it on your kitchen window sill, adjacent to your stovetop, and even in exposed regions. This will let the soy sauce retain its flavor and quality. Also, if you have a space problem and it is too much in quantity, put it in another jar, and you can store the remaining quantity directly in your fridge.

Alternatives for Soy Sauce if it Goes Bad

In case you are craving Chinese cuisine dinner, but the soy sauce in your pantry has gone bad, you can use the following alternatives:

Is Soy Sauce gluten-free or not?

If you check the ingredients mentioned on the bottle, the one ingredient will be wheat. Due to the presence of wheat as the main content, soy sauce contains gluten. This was the traditional method.

Besides, some brands manufacture gluten-free soy sauce and yet taste similar to conventional ones. Here, the point is if you are allergic to gluten, you can check the contents before buying one.

Can soy sauce give you food poisoning?

Consuming expired soy sauce will not give you food poisoning. However, the ones with mold can make you sick, which is why it is best to toss out such bottles of soy sauce.

The fermentation process proceeds to break down the wheat starches into sugar. A small part of that sugar is changed into alcohol which might be the reason behind your soy sauce smelling like alcohol.

The notable part of the above discussion is that no matter whether the bottle is opened or not, you have to see that every time you are done using it, it should be sealed tightly.

Further, there is no rule to keep it in the refrigerator once it is open. However, if you store it in your refrigerator, it can retain its taste and flavor for a little longer.

Thus, there are pretty small things that you have to take care of while storing the soy sauce. Such things will help you to get a fresh taste and smell when you use them. I hope it will help you a lot. Take care!