How often have you found yourself on the receiving end of discovering an old Spaghetti sauce bottle and considered it a gift from the God of Groceries? Well, okay, that was a bit far-fetched, but we know you can relate to the feeling of finding an old bottle of spaghetti sauce from the back of your pantry.

In such scenarios, the first thing that you should do is check the bottle for its shelf life. Because, at the end of the day, spaghetti sauce will likely go bad, like all other sauces.

But you can avoid such circumstances in the future and extend its shelf life with the correct storage techniques. Use the following article as a reference to store spaghetti sauce so that you never have to deal with a bad spaghetti dish. 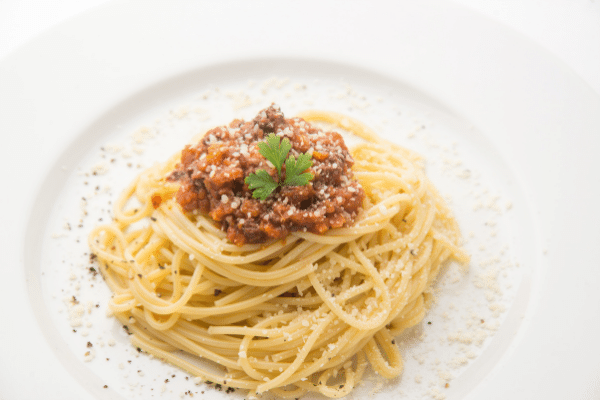 The store-bought Spaghetti Sauce comes with a best-by date. But, you must not confuse it with the expiry date. The best-by date is just the estimated time for how long the sauce will be best in quality. After the best-by date, the quality starts degrading.

For an unopened bottle of Spaghetti Sauce, it is safe to use the sauce for an extra three-five months after the best-by date, provided that it is stored properly in the fridge or pantry. It must not be exposed to direct sunlight or any heat sources.

The opened Spaghetti Sauce’s shelf life is one week, especially when stored in a fridge after opening. After that, it starts losing its quality and taste. But, the sauce is safe for consumption even after two weeks of refrigeration. The taste may differ.

How Long Does Spaghetti Sauce Last out of the Fridge?

If you live in an extremely cold region (< 40-degree F), your spaghetti sauce has a fairly good chance of lasting for a few days out of the refrigerator.

If not, it will rapidly show signs of spoilage. Once it is kept out of the refrigerator, you have approximately 4 hours before your spaghetti sauce starts to lose its quality.

How to Tell If Spaghetti Sauce Has Gone Bad?

If you see any signs of mold growth or bacterial formation that are not supposed to be in the bottle, discard the sauce. Mold or bacteria growth is common after the bottle is opened and exposed to air.

But, it is also common in unopened bottles when the bottle is not sealed properly, the air is leaking into the bottle, or when the package is damaged.

The smell of the Sauce

The next sign is the smell of the Spaghetti Sauce. If the smell of the sauce gets funny, consider it as an indication that the sauce has gone bad and must be discarded. So, look for such signs, and if it smells like fresh tomatoes, then it is safe for consumption.

The next sign is the texture and color change. As a matter of fact, the thicker and darker sauce does not always mean that the Spaghetti Sauce has gone bad. But you must discard it as the quality is not the same in such cases.

How to Store Spaghetti Sauce? Refrigerated or Shelf-Stable?

What’s the difference between refrigerated and shelf-stable spaghetti sauce?

It is safe to use the unopened Spaghetti Sauce within the best-by date. But, there is no harm in using it after that, provided it is stored properly as recommended and the bottle is undamaged. For open Spaghetti Sauce, the best place is a fridge. After opening the bottle, store it in a refrigerator to extend its shelf life for seven-ten days.

Since Spaghetti Sauce is not a shelf-stable sauce, it must be refrigerated once opened. However, room temperature is fine for the storage of sealed and unopened bottles. The best place is the kitchen cabinet or the pantry.

Ensure to store it at a place that is away from direct sources of heat and sunlight. It must be kept in dry, cool, and dark places.

Is it OK to use expired spaghetti sauce?

The best-by date only estimates how long the sauce can sustain its original quality and taste. Spaghetti Sauce lasts for an extra three-five months post expiry, and it is safe to consume the sauce during this period.

However, as per sources, some people may suffer from gastroenteritis resulting from food poisoning. It affects only those people who consume the spoiled sauce. They may experience stomach pain and gas. People with food allergies are prone to such conditions.

Can You Freeze Spaghetti Sauce? 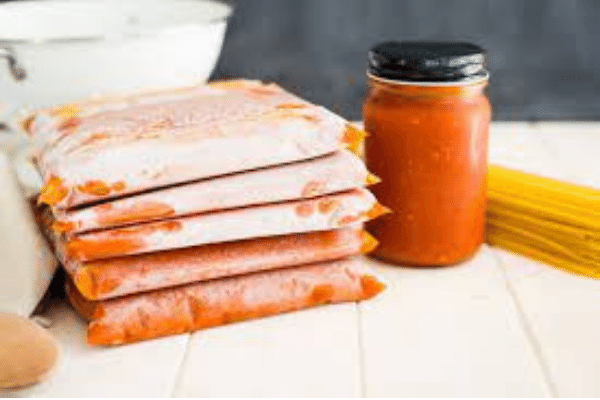 Freezing Spaghetti Sauce is recommended, but it depends on what condiments are used for its preparation.

Spaghetti Sauce made out of emulsified and creamy ingredients is not prescribed for freezing. The sauce tends to split when fully frozen, resulting in flavor, texture, and consistency alteration.

If the sauce is tomato base, you can freeze it to extend its shelf life. But, you must be cautious enough when freezing the Spaghetti Sauce because certain vegetables and herbs don’t freeze properly. Rosemary, sage, thyme, and basil are herbs that add bitterness to the sauce when frozen.

How to Freeze Spaghetti Sauce?

How to Store Spaghetti Sauce 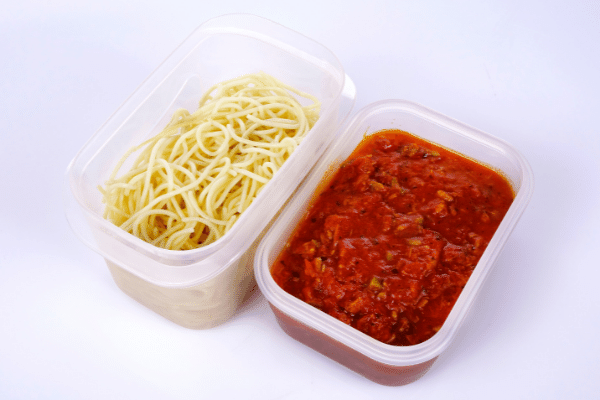 The storage methods vary from unopened to opened bottles and homemade Spaghetti Sauce. So, below is a helpful storage guide for you.

The unopened Spaghetti Sauce bought from a store can be stored in dry and cool places. The kitchen cabinet and the pantry are the best places to store the commercial Spaghetti Sauce. No matter where you store the unopened sauce, it must be away from the direct sources of heat and sunlight.

After opening the jar of Spaghetti Sauce, it belongs to your fridge. You must store the opened sauce in a refrigerator as keeping it outside the fridge may lower the shelf life and quality of the sauce.

Since it is exposed to bacteria when stored outside, spoilage increases. So, refrigerate it immediately after opening the sauce and secure the lid tightly.

Spaghetti Sauce made at home must be stored in a fridge. If the sauce is canned, it is okay to keep it outside the refrigerator for a couple of days. But store it in dry and cool places.

But, when you want to store homemade Spaghetti Sauce for an extended time, freeze it without a second thought.

What are the Alternatives to Spaghetti Sauce if it has gone bad?

In case you find yourself with a sudden need for spaghetti sauce for a recipe but can’t seem to find a fresh bottle, you can use the following alternatives:

Q. How long is Prego sauce good after the expiration date?

As long as the bottle remains unopened and stored in the refrigerator, Prego sauce will last for a good couple of months, approximately 12-18 months after its best-by date. However, do check its taste, aroma, and texture before consumption.

Q. How Long Does Homemade Spaghetti Sauce Last in Freezer?

If you have prepared homemade Spaghetti Sauce using little or no herbs, it tends to last for three to four days. However, freezing must be done carefully with proper caution. The sauce must be poured into an air-tight container before freezing. Avoid freezing it in a glass jar.

Q. Does Spaghetti Sauce Go Bad If Left Outside the Fridge?

Most Spaghetti Sauces are highly processed, and hence they can survive in your pantry when unopened. Since we often look for less processed foods, they need to be stored in a fridge, especially once they are opened, to maintain their flavor, freshness, and color.

Most jarred spaghetti sauces have a shelf life of one year. But you will have to consume it as soon as possible once you open the bottle.

Q. How long does Rao’s sauce last after opening?

Rao’s spaghetti sauce must be refrigerated as soon as they are opened. Moreover, they must be consumed within the next 12-14 days. If you are not going to be using it any time soon, you can freeze it and use it for the next 6 months.

Q. How long does Prego spaghetti sauce last in the fridge?

Since it is a highly acidic canned food, Prego spaghetti sauce lasts for 4-5 days in the fridge after opening. After that time frame, it might show signs of degradation.

Q. How long does pasta sauce with meat last in the fridge?

Pasta sauces without meat last for 4-5 days in the fridge. However, the one with meat loses quality faster. It is best to consume such sauces within 2-3 days.

Different factors influence how long Spaghetti Sauce lasts in and outside the fridge. But, the unused and unopened Spaghetti Sauce can last for a few days longer than the homemade sauces. The leftovers are always prescribed for proper refrigeration to extend their shelf life, and after that, it is better to toss them out.