Cinnamon rolls, consumed with coffee, milk, or orange juice, make up a delicious breakfast. Serve it with a bowl of fruits, and your guests will remember you as the person with the most delicious and generous recipes.

However, storing such cinnamon rolls can come off as a bit of a hassle as they tend to lose their freshness quickly. But you can retain its quality with the correct storage techniques.

Don’t know how? Hey, that is exactly what we are here for, as the following article contains all the necessary information about the storage techniques. Read ahead and learn the best techniques to preserve your favorite cinnamon rolls for an extended period.

What is the shelf life of cinnamon rolls? 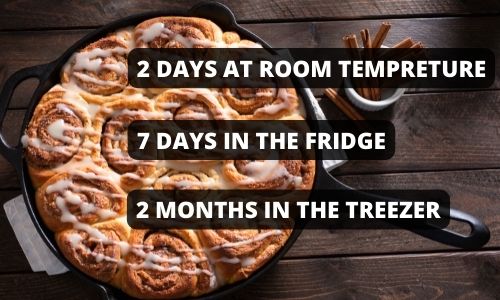 All expired food can make you sick. And all bakery food items can spoil once their shelf life is over.

This same thing happens to cinnamon rolls if you keep them open at room temperature for more than 2 days in your kitchen. However, place them in the fridge if you want to save them for at least a week.

If you want to preserve them for 2 months, place them in the freezer. Yet, make sure to do it appropriately. Otherwise, it is likely to reduce its shelf life.

And to do so, you have to pack them nicely in plastic wrap and place them in a high-quality airtight container.

Do you wish to know what happens once you eat rotten rolls? Well, then scroll down now.

How do you know if your cinnamon rolls aren’t fresh enough to eat?

Just don’t put your health at risk merely to satisfy your sweet tooth.

This deliciousness will add bitterness to your body because it causes diarrhea, stomach aches, and vomiting.

To know if your cinnamon rolls are stale, check for the following pointers:

What happens if you eat Expired Cinnamon Rolls?

Mold is hazardous to your life and can lead to shortness of breath, nausea, a high body temperature, or diarrhea. You may require immediate help.

In case you see any of these indications on rolls, make sure to throw them right away. 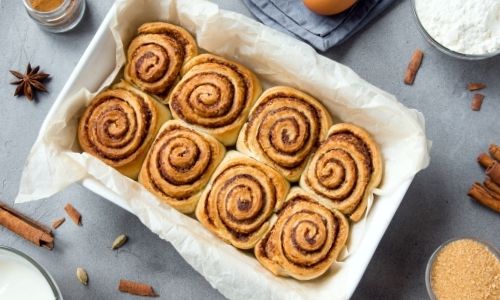 To keep cinnamon moist and fresh, you have to keep them in an airtight container. Cover each roll with plastic wrap or tin foil, then put it in a freezer bag.

If you like to put them in a pan and don’t want to wrap rolls individually, you can wrap the pan tightly enough to keep them fresh and moist.

But in case your cinnamon rolls get dry, then you can make them fresh again.

Well, the first way to retain moisture is to microwave them. But, it is not just a simple microwave process. There is a twist. So, start by steaming a cup of water in the microwave.

Meanwhile, you have to butter all the dry parts of the roll as per your need. Then, while the water is still hot in the microwave, heat the roll for 30 seconds at a time till it is warm and soft.

YAY, you can now enjoy fresh rolls for your breakfast.

Well, if you have more time, you can try another method too.

Add a slice of bread or an apple to the storage container. This may appear bizarre, but it is a popular approach for preventing the staleness of other baked items such as cookies.

Are you thinking about how it works?

Well, it is just that the rolls will absorb the moisture from bread or apples. Then you will be able to make soft rolls after a couple of hours.

Note: If you use more than one slice, the rolls will get mushy.

Can you freeze cinnamon rolls? 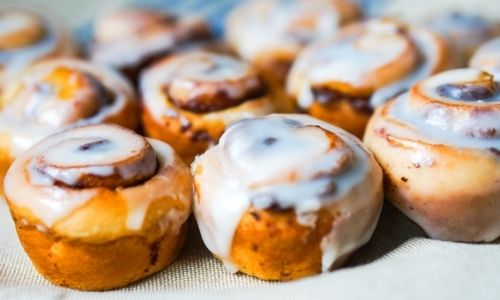 Yes, you can freeze cinnamon rolls. However, it is not recommended because the yeast in the roll will lose some of its potency if frozen for so long.

Instead, let them be there at room temperature and use them within two days as they won’t spoil. If you are still looking to freeze them, there are three techniques for this.

The first method involves rolling and cutting the rolls as usual, then firmly wrapping them in plastic and freezing them before they arise.

The problem with this freezing trick is that if you forget to move the sheet tray to the fridge, you have to wait for at least five to six hours to thaw the rolls at room temperature.

Again wait for them to rise.

Basically, you can freshly make the new batch of the rolls in that time period.

So, if you want to go with a better method, then you can try the second trick, which is par-baking cinnamon rolls. In this, you have to bake them partially until they’ve risen to their full height but haven’t started to brown.

And this method will generally take about ten to fifteen minutes. First, take out the pan from the oven and let it cool thoroughly. If you wrap these lovely rolls when they’re still warm, they’ll freeze with frost on them. Thus, before wrapping, cooling is essential.

When you’re ready to wrap, simply wrap the entire pan with two layers of plastic wrap and place it in the freezer. And the night before you’re ready to serve them, transfer them to the fridge and let them thaw there overnight.

Bake them nearly for 10-15 minutes at 350 degrees F, or until evenly browned.

Note: You can keep them in the fridge for only two weeks.

Is this tiring? Well, then we have the simplest, most effortless three-step method.

In this, you just have to bake them, put some icing, cover them perfectly in plastic wrap and let them freeze. That’s it. When you want to eat some rolls, simply reheat them in the microwave.

Note: You may need to put another layer of icing after heating them in a microwave.

Check out the next section to see if refrigerating frosted cinnamon rolls is a good idea or not.

Is it okay to refrigerate cinnamon rolls with icing?

We would advise you to keep rolls at room temperature, whether they are iced or not.

Once you place them in the fridge, the cool and dry air can make rolls stiff.

However, keeping them in the fridge can increase their shelf life. Generally, rolls keep their softness on the counter for two to three days.

But if you are worried about the icing, then don’t worry because the icing will work as a preservative as the high sugar content in the cheese frosting and cream inhibits microbial activity.

As a result, bacteria are unlikely to be a concern if the rolls are wrapped as firmly as they should be. 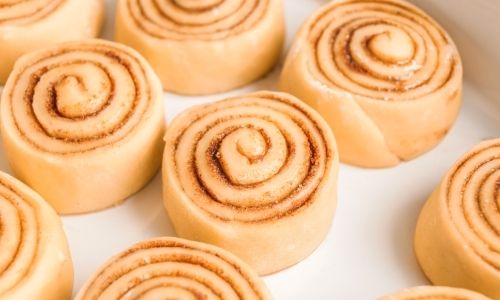 If you are not willing to bake cinnamon rolls and want to keep them as it is in the freezer, then make sure to neatly wrap them in paper or plastic and place them in the freezer. In this way, it can last for six weeks.

Note: You must store cinnamon rolls in a way that preserves their moisture.

Do you wish to learn how to keep cinnamon rolls after the first rise? Well, then check the next slot.

Can you refrigerate cinnamon rolls after the first rise?

Yes, you can surely refrigerate your cinnamon rolls after their first rise.

But, the reaction of yeast may slow down as yeast works actively at hot temperatures. This is because more molecules have the energy to react at higher temperatures.

So, when you put your tray filled with cinnamon rolls in the fridge after the first rise, the yeast becomes inactive. It will hinder the rising process, but it won’t completely stop it.

Because you won’t be able to stop them from expanding, we suggest you store them for at least two and up to three days (keep them for 2 days if you don’t like the dough to change too much)

If you wait longer than this period, you will risk over-proofing the dough, and it will collapse.

We would advise you to place the dough in a glass bowl and cover it with plastic wrap to keep it fresh. Remember to check if it’s completely sealed.

How do you reheat cinnamon rolls?

Do cinnamon rolls with cream cheese frosting need to be refrigerated?

Always remember to refrigerate cinnamon rolls with cream cheese frosting or any kind of frosting. This ensures the preservation of the taste and freshness.

If you keep them at room temperature, your delicious cinnamon rolls can expire within two days. If you want to extend their life, you can wrap the rolls in plastic and put them in your fridge. It will be fresh for a week.

Make sure to wrap the rolls properly because they may reduce their shelf life if you fail to do so.

We would advise you to keep them at room temperature and consume them fresh within a few days. Cool air may make your rolls hard if you put them in the fridge.

If you have any queries about cinnamon rolls, do let us know in the comment section below. And if you love this article, please share it with your friends and family.