Baking requires experience, expertise, and the correct set of ingredients. Give the most minute thing a miss, and you might end up ruining the entire dish. However, several bakers have varying views about certain components. One such example is coconut oil.

While some prefer melting it, others prefer its solidified version. But which one should you go for? Well, we’d advise you to use melted coconut oil as it can enhance the taste and texture of your cakes. But it would help if you melted it in a particular manner and in certain circumstances to reap the benefits.

We have provided a close look to help you understand the use of coconut oil in baking. Read along and learn how to enhance your baking recipes’ overall taste and texture with coconut oil. 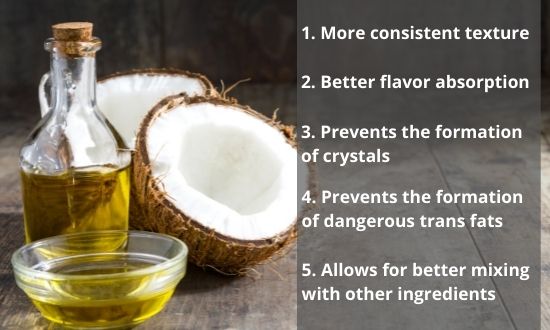 Here are a few reasons why you might want to melt the coconut oil before baking:

If you’re baking something like cookies or cake, you want the final product to have a consistent texture throughout. This can be difficult to achieve if your coconut oil is solidified, as it will create clumps in the batter. Ensure a smooth texture by melting the coconut oil first.

When baking, you want the flavors to be evenly distributed throughout the cake or cookie. First, Melting the coconut oil will help distribute the flavors more evenly, resulting in a tastier final product.

3. Prevents the formation of crystals

If your coconut oil is solidified, there’s a chance that crystals will form when you bake with it. These crystals can ruin the texture of your baked goods and make them less enjoyable to eat. Melting the coconut oil beforehand will help to prevent this from happening.

Trans fats are created when oils are solidified, so by melting your coconut oil, you can help to prevent the formation of these unhealthy fats. It also makes the coconut oil easier to digest, which is a bonus. You might also want to consider using virgin coconut oil, as it contains even fewer trans fats than regular coconut oil.

5. Allows for better mixing with other ingredients

If you’re making a recipe that calls for creaming butter and sugar together, it’s much easier to do this if your coconut oil is in a liquid state. The same goes for mixing coconut oil with other liquids, like milk or eggs.

When Not To Melt Coconut Oil For Baking

Even though there are some benefits to melting your coconut oil before baking, there are also a few situations where it’s unnecessary.

How To Melt Coconut Oil For Baking

There are a few different ways to melt coconut oil for baking. The best method will depend on the amount of oil you need to melt and the ingredients you’re working with.

Whichever method you choose, stir the coconut oil occasionally while it’s melting to help distribute the heat evenly and prevent it from burning.

Tip: If you’re baking something like cookies, you can place the coconut oil in a liquid measuring cup and set it out on the counter for an hour or so until it’s melted.

Will coconut oil harden after melting?

Since coconut oil melts at 78° F and solidifies at normal room temperature, one will have to ensure using it while it melting, as far as baking is concerned. This is because it can be challenging to cook or bake with solidified coconut oil.

How does coconut oil affect baking?

When it comes to baking, oil is necessary to make the final dish soft and moist. It is one of the ways through which the bakers ensure fluffiness. This is why it is necessary to use coconut oil for baking.

Is coconut oil better than butter for baking?

While butter is concerned to be a prioritized option when it comes to baking, coconut oil proves to be a worthy substitute. However, coconut oil will make your dish greasy and crumbly. Moreover, the smell of coconut might linger on. Nevertheless, it is an effective alternative for making the dish fluffy and soft.

There are some benefits to melting your coconut oil before baking, but it’s not always necessary. If you’re short on time, you can skip the melting step and use your coconut oil in its solid form.

Ultimately, it’s up to you whether you want to bother with melting it. If you decide to melt your coconut oil, be sure to do so carefully to avoid damaging the oil.